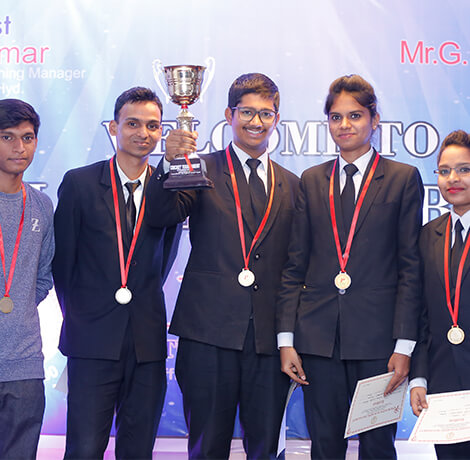 Education prepares one to face challenges of life by bringing out the best in one-self. This system will adopt changing technologies which are relevant to the needs of the time and always be proactive.
We at the Pioneer Institute of Hotel Management (PIHM), follow Gandhiji's saying, The future depends on what you do today? with strong commitment. We set the base right for our Students today whereby, they become the most sought after professionals of the hospitality industry. Our institute has so far churned out many highly successful professionals who are working within India and abroad.

Pioneer Institute of Hotel management is a professionally managed institute under the affiliation to Osmania University and State Board of Technical Education & Training. The Institute was established in the year 2000 by the CBM Educational Society (Registration no: 996/03) and duly got registered as per the Andhra Pradesh societies act. The unique feature of the society is that all the members are stalwarts of the hospitality industry and other fields of Education.

Pioneer Institute of Hotel Management is a premier educational institution which is nurturing ground for student's development to make effective contribution to the society in a dynamic environment.

To be the No.1 institute to churn the aspirants of diverse backgrounds to best professionals for the industry

Apart from the above, our internal council of Academic Advisors are professionals & experts in hospitality and tourism industries and culinary professionals. As a result, the students of this institute are churned up for excellence to suit the needs of the industry. The interactive method of teaching at Pioneer Institute of Hotel Management will bring about attitudinal changes to future professionals of the Industry. Pioneer has always been committed to its academic excellence and professional competency and has been providing quality manpower to the Hotel and allied industries since 2000.

And to prove it all, This Institution is awarded as the Best Tourism Educational Institution in terms of overall performance from the Department of Tourism, Government of Andhra Pradesh in the year 2010.

Hyderabad, the fifth largest metropolis of India, is the state capital of Andhra Pradesh, known for its rich history and cultural heritage with monuments, mosques, temples, arts, crafts and dance. Its language and mannerisms still exude the rich and legendary past. The Nizams of Hyderabad were known to be one of the wealthiest in the world. The elegant buildings, marbled temples and monuments stand testimony to it. And in the recent past, Hyderabad has witnessed a never before, never after boom in the IT and ITES sectors creating more and more demand for hospitality professionals to cater to the services needed by these sectors.

Our college is established with world class standards infrastructure spread over 20,000 sft. So far churned 650 students as professionals settled in India and abroad. The unique feature of the society is that, all the members are stalwarts in the Hotel Industry / Education. It is ideally situated at the center of the city addressed in between VST & Ramnagar 1KM away from RTC X-roads, 4KM away from Sec-bad railway station.

Name of the society:CBM Educational Society - Registration no: 996/03.

We are also proud to be:

Osmania University, established in 1918, is the seventh oldest in India, the third oldest in south India and the first to be established in the erstwhile princely state of Hyderabad. Throughout its existence of over eight decades, it has shown remarkable progress and sustained an integrated development of all faculties. It has significantly contributed to the academic and economic development of not only the region but also of the Country. Its alumni have distinguished themselves nationally and internationally in various spheres of life and are spread far and wide around the world.

In recognition of its excellent academic achievements, Osmania University had the distinction of being awarded the FIVE STAR status by the National Accreditation and Assessment Council (NAAC) of the University Grants Commission, Government of India in the year 2001.